We may have the idea of how the traffic enforcers on the streets can direct the traffic with their efficiency.  But what about the job title for a 15Q, Army Air Traffic Controller? Is there such conduction of traffic up in the air? Well, as the job was already made, there is an existence of course.  The Army Air Traffic controller is a specialist that secures safety in the open field of Army air space.

While it’s arguable if conducting the air traffic or flying the multi-million (or billion) aircraft is more difficult, let’s take note that there’s more in conducting than merely driving.  The 15Q, AATC is all set to monitor the motions and flight activity of the various flight machines scheduled up in the air.  What’s more? The Army Air Traffic Controller do all of these in a single occasion.  The job is so technical that it encompasses strict control, plan, logs, records, files, recordings and voice communications… all of those to elude probabilities of airborne (or ground) collisions.   Describing the job, it sounds more like of being the VA (virtual assistant) of all VA’s!

When deemed worthy of raising ranks, AATCs can find themselves holding positions in Special Advisory or Liaisons with FAA (Federal Aviation Administration) which is in close ties with the Army itself.

Aspiring Army Air Traffic Controllers must have attained their High School diploma, 101 marks (or higher) in the skilled technical (ST) aspect in the Armed Services Vocational Aptitude Battery Test. One must also ensure the he doesn’t have abnormal color vision or color blindness.  If the candidate proves to have alcohol or substance addiction, he may not be admitted as a 15Q potential.  An elaborated background check, hence, is to be submitted to be declared qualified for the AATC post.

Candidates are ushered for a basic Army training.  From there, passers are to proceed to a formal training program for 15- week duration at Fort Rucker, Alabama where the Army Aviation Center sits.  Herein, the neophytes are further equipped with the elementary knowledge aiming at the “combat critical tasks of the MOS (Military Occupational Specialty)” using the state- of- the-art facilities and materials. 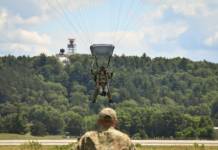