A quick response or QR Code is a specific barcode that gained internet fame these past few years because mobile phones with cameras allowed its users to quickly scan the image to get info on a specific product the easy way. QR Codes can be used to encode text or other data besides URL (Uniform Resource Locator). Nowadays, Smartphones (both iPhone and Android) have apps that let you read QR Codes via instant capture. Because of this, they are also known as two-dimensional barcodes, hard links or physical world hyperlinks.

When a mobile phone scans or reads a particular QR Code, that code will send you off to a website or open an online voucher or a business card. In places like Korea, people just put an image of a certain item in their sites along with the QR Code. People who are interested in buying it will just scan the QR Code, which directs them in a web page that contains an online purchase form.

When using Delphi, you can generate QR Codes in several ways. These codes can store up to 4,296 alpha-numeric text characters.

These are the Delphi software components that let you generate QR Codes, the Delphi way.

2D Barcode VCL components – is a component set that is designed for printing and generating barcode symbols in your Delphi or C++ Builder applications. Use this just like the way you use other VCL components.

How to Return Multiple Values from a Delphi Routine

How to Use TDictionary in Delphi 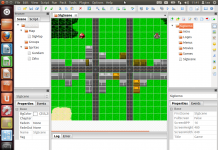