Long Gun is the general term used in order to categorize firearms and cannons with longer barrels. In firearms, rifles and shotguns belong in this class while the Howitzer is the artillery from the cannon type that can also be classified as a long gun.

Because of having longer barrels, these guns not only improve the power and range of the firearm or cannon as a whole but also its overall accuracy. Since long guns usually have a stock that can be braced in the shoulder, the impact of the gun’s recoil is directly absorbed by the body of the shooter. High-powered rifles (rifles that use .50 centerfire and higher caliber cartridges) have a stock that can make use of a telescopic or red-dot sight, therefore ensuring a more accurate aim than handguns.

However, these guns also have its disadvantages. Guns with longer barrels are heavier than handguns, which makes them (and their ammunition) more difficult and tiring to carry. Aside from that, doing a quick, accurate aim and fire using these weapons are close to impossible. That’s the reason why snipers conceal themselves in order to avoid detection by their enemy targets.

There are three important things for you to remember in order to fire these guns, which are listed here:

This is what your favorite action star usually does. It is achieved by leaning the rifle or shotgun butt in your ‘weak-side’ shoulder, that is, if you’re right-handed, you will lean your gun in your left shoulder and vice-versa.

This stance is achieved by squaring your shoulders depending on your target and standing with your feet apart in a straight line at shoulder-width. Place the rifle or shotgun butt up in your own chest and near your body’s center line. Be sure to keep your two elbows down.

Rifles : What You Need to Know and How to Use 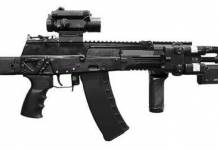