Just about February this year, DSK-Benelli had decided to launch its latest motorcycle, the 2016 TNT 600i in India. First shown on March last year, the said motorcycle is actually one of the five Benelli models that were displayed during that time. And along with other big motorcycle names such as Ducati and Kawasaki, the TNT 600i is also one of the first 600cc four-cylinder motorcycles that have set its foot in India.
DSK Benelli TNT 600i 2016 Launched in India at Rs. 5.91 Lakh Price

The 2016 DSK-Benelli TNT 600i has a 600cc four-cylinder petrol engine which has an electronic fuel injection feature. Mainly made of steel in front and light aluminum at the rear, the liquid-cooled engine is said to run at 82bhp maximum power and 54 joules of torque. This maximum speed and torque rating became possible through the help of six-speed transmission. This is also one of the first TNT 600i motorcycles that feature an ABS addition. Needless to say, this technology will also make the company put the non-ABS motorcycle models out of commission forever, whether it is still out in the market or not. As motorcycle experts know, the ABS feature is now a motorcycle standard in order to make sure that the rider can use his motorcycle safely regardless of both terrain and weather changes.

When compared to its direct predecessor, the 2016 TNT 600i looks exactly the same. This is due to the fact that most of the company’s customers actually prefer the same motorcycle design. If there are distinct changes, it is none other than the heavy steel front and light aluminum trimmings at the motorcycle’s rear. Being one of the fastest-growing motorcycles in India, the 2016 TNT 600i is said to be followed by the announcements regarding the release of its four other companions before the end of this year. The most awaited of these four are the TRK 502 Adventure Tourer and the Tornado 300. 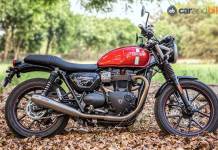