The Golden Temple, more locally known by the name of Darbar Harmandir Sahib, is the central Gurdwara or place of worship, for all the Sikhs in the world. It is located in Amritsar in Northern Punjab, India, a place that is close to Pakistan’s border. The Golden Temple’s name came from its proper name Harmandir, which means ‘Temple of God’, and Darbar Sahib, meaning ‘Court of the Lord’. It is called the Golden Temple due to its overall ‘Golden’ look.

The Gurdwara itself, having constructed from white marble inlaid with genuine gold leaves, stands in the center of a Sarovar, or a pool of fresh and clear water. The Sarovar’s water comes from the river Ravi, which is said to have originated from the sacred Ganges River. Pilgrims and Devotees alike gather inside the Gurdwara to worship, hear the Holy Scripture of the Guru Granth Sahib and listen to hymns, in addition to bathing and performing ablution in the Sarovar. The Gurdwara has four entrances facing four primary directions, meaning (rather symbolically) that everyone is welcome to worship, regardless of creed, color, caste or class.

The Akal Takhat (also known as Akal Banga), on the other hand, is the foremost throne of the five Takhat of Sikhs. It is connected by a lamp lit bridge to the Gurdwara itself. It houses the Guru Granth Sahib while cleaning is being done between midnight and 3am. An early morning conch shell sound is heard when it is time to perform ardas and prakash. 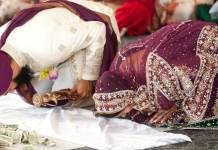 The Four Hymns of Laav in Sikhism’s Wedding