In a Sikh Wedding, the Lavan Hymns, or Four Hymns of Laav are being performed throughout the ceremony.

What is the significance of the Four Hymns of Laav, by the way? The Hymn itself, as a whole, outlines the progressive stage of the soul-bride as she advances spiritually, ultimately uniting herself with her divine groom, as she realizes her divine destiny. These hymns are actually compositions of the Guru Ram Daas and were written for his own wedding to Bibi Thani, his wife. The hymns are meant to unite the soul of the bride and groom into one conscious being, wedded to God in a Spiritual Union. The Lavan Verses came from the Guru Granth Sahib, the holy scripture of the Sikhs.

Lavan’s first verse asserts that marriage is being encouraged as the best state of life of a Sikh. It is being recited as the wedding couple bows in front of the Guru Granth Sahib. The bride and groom are both instructed to perform their wedding obligations, embrace righteous conduct and renounce sinful actions, rather than just ‘merely reciting’ hymns of the Vedic Brahman. They are also instructed to Worship and adore the Perfect True Guru, along with contemplative remembrance of the Naam, in order for their sins to be dispelled.

The Second Lavan conveys the awakening of the bride’s feelings of love when leaving her former life, and beginning a new life in union with her husband. A Granthi reads each matrimonial hymn aloud from Guru Granth Sahib in the second Laav. The couple acknowledges that the fear of the Immaculate Lord, the Supreme Soul and master of the universe, frees the couple’s minds of their own fears and the filth of egotism is eradicated.

This declares the bride’s detachment from the world and outside influences, becoming more deeply devoted to her husband at the same time. The bride and groom walks around the Siri Guru Granth Sahib, as they were joined by the palla, while the Ragis sings each verse.

The fourth Laav describes a spiritual union of love and devotion, where no feeling of separation is possible, therefore imparting perfect joy and contentment. After the completion of this Laav, the bride and groom are now considered man and wife. 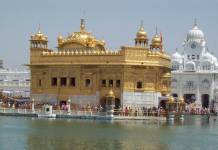